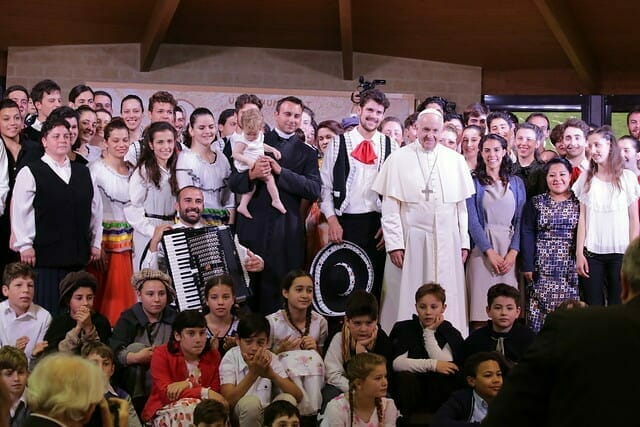 Expected early in the morning with trepidation, concentrated, attentive, image of a caring and solicitous Church. Sober in words, but direct and effective. Pope Francis has proven faithful to his commitment to support and encourage those who spend their lives for others. For Nomadelfia the biggest gift arrived today, on the helicopter landed in the sports field and left in an hour and a half. Enough time to give us an encouragement that we will hardly forget.

Nomadelfia is a prophetic reality, said the Holy Father. "Your founder has dedicated himself with apostolic ardor to preparing the ground for the seed of the Gospel, so that it could bear fruits of new life". He spoke of "visible signs" and "prophetic signs" of another life, another possible world, which Nomadelfia and many Christians in the world want to live from now. "I urge you to continue this lifestyle, trusting in the power of the Gospel and the Holy Spirit, through your clear Christian witness".

The Holy Father wanted to underline our familiarity, the mutual support that is experienced in Nomadelfia, signs of a model embodied in the concreteness of a new language. “In the face of the suffering of children orphaned or marked by discomfort, Don Zeno understood that the only language they understood was that of love. Therefore, he was able to identify a peculiar form of society where there is no room for isolation or solitude, but the principle of collaboration between different families applies, where the members recognize themselves as brothers in the faith ". Precisely this language of love, which breaks down the walls of our ego, binds us in a "special bond of consanguinity and familiarity", a "consanguinity with Jesus".

"Continue on this road", he repeated, "always keeping the spirit of Don Zeno who wanted a light and essential Nomadelfia in its structures". He urged us to a joyful and serene testimony, thanking us for the warmth and family life with which he was welcomed. Thanks also reiterated just before leaving, making, as is now his habit, a small tear to the official program. "These gifts", he said referring to the gifts given to him by some boys from Nomadelfia, "come from the family, from here", pointing to his chest, "and this is important". Words spoken with the simplicity and frankness of those who care about every single gesture, despite having to follow a tight schedule. And Nomadelfia will always be grateful to this Pope who came from heaven like a meteor, to dedicate encouragement to us too, a small reality in his great Church of tenderness.