"Let's stick together ... this is just the beginning" 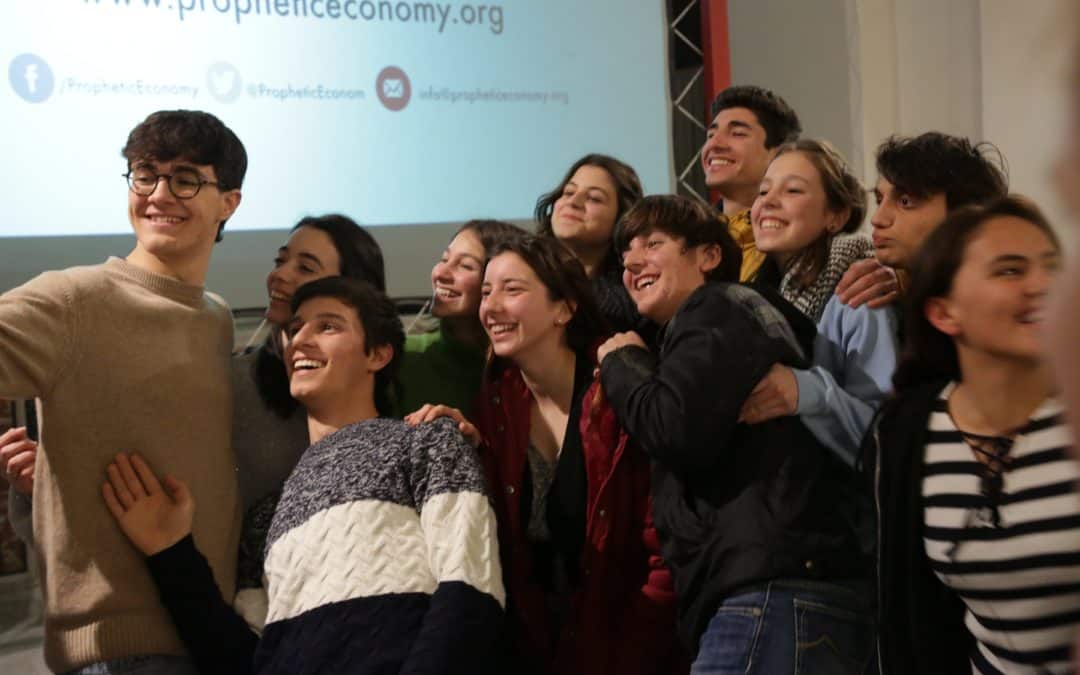 On Sunday 9 February the Prophetic Economy Young conference was held in Naples entitled "Enhancing beauty to give Hope." Around 250 young people and adults from all over Italy were present. The event was also in preparation for the Economy of Francesco to be held next March in Assisi. Prophetic Economy is a process that started about two years ago in Castelgandolfo with a large event that involved around 500 people from various countries around the world. The meeting was promoted by various realities of the Catholic and lay world who are engaged at various levels in proposing new respectful and inclusive lifestyles that manage to unite the cry of the earth with that of the poor.

I'm standing here in front of the keyboard, trying to convey what happened on Sunday 9 February in Naples in the Sanità district in characters and lines. Maybe I'm too involved, maybe I'm afraid to forget something important or maybe I'm not the right person who can write this article. Because despite having collaborated with many others to prepare this event, despite having participated with attention and sincere involvement, what happened far exceeds any of my expectations or forecasts.

The protagonists expected were young people; the event was called Prophetic Economy Young, as promised by the boys themselves in Rome during the Prophetic Economy 2.0 event, last June: "Next time come to Naples and you will be the adults to listen to us".

It is not easy to listen seriously to young people, especially when they are prepared and motivated, but if you do it with a welcoming heart, you cannot remain indifferent. Their speeches are full of hope and concreteness, emptied of the rhetoric of those who with word games try to find justifications and answers to every question. The strength of what they say is shocking because they are still able to dream and are aware that this is their moment, so they want to be protagonists of their future, and consequently also of their present.

I could tell you about the various workshops, or about the fabulous and inspiring experience of the La Paranza cooperative that hosted us in the evocative Catacombs of San Gennaro in the Sanita district and which opened the event by telling us how the liveliness and determination of some young people has given hope to a entire neighborhood, or the beautiful dialogue between young people and Luigino Bruni (presented as a famous economist and dear friend), but it would reduce what we have experienced in cold news.

I still can't fully reap the benefits of this meeting, I don't know how much our world, our cities or simply our heart will change. What I learned further is that there is no chance, but that every meeting can shake us, can challenge us and can make us grow.

Especially because young people teach that the important thing is not always the result, but the experience. But let them tell them. For example, Maria: “I definitely bring home the experience I had today and also the other inputs that came to me but above all the love that circulated among all but in particular between us and the kids from Nomadelfia we were one heart and one soul ... I am very happy, I return home rich but not materially but in my soul and for this I must thank each of you. " Or Simona: “Thanks for the wonderful day spent together. I felt just like we were one body, we felt the unity between us in the beautiful moments and in those when we hesitated a little. "

But I want to close with Luigi's exhortation: “Thank you very much to everyone in addition to this day, thanks for what you are every day, each one in their own countries. Let's always stay united ... this is only the beginning "