Welcome to the family, thank you Pope Francis! 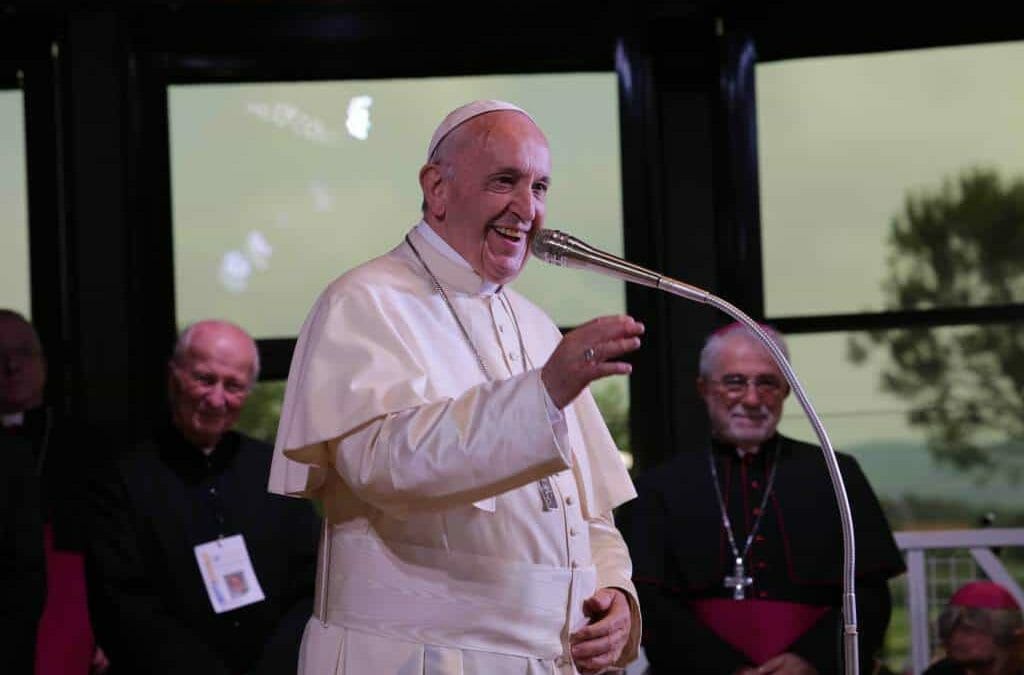 "It will take a long time to fully understand the scope of the words that Pope Francis addressed to us, which together are an invitation to go ahead, to be open, to renew ourselves and to follow at the same time the road started by Don Zeno". This is how the president Francesco di Nomadelfia made his debut at the press conference closing of this wonderful morning together with Pope Francis.

Yes, we are still high, in ecstasy and surely it will take many days to understand the great message of this day, at least as many as we have committed to organizing this meeting.

Even Fr Ferdinando, Fr Zeno's successor, noticed a Pope "surprised and admired" to know our reality and to know, above all, the figure of the mother by vocation "a figure who more than any other resembles the Madonna, Virgin and Mother" .

It is one thing to hear the story of Nomadelfia, it is another to live it and get to know it: today our Pope Francis also experienced this experience and we met him, prophet of our Church, as our Don Zeno was then.

More than a visit, it was a coming to the family. Since the official announcement of February 2, in the last few months, weeks, days, the preparations have become more and more intense to best welcome Peter's successor.

Already in the early hours of the morning there is an atmosphere of great trepidation in Nomadelfia.

More than 4000 people, among friends, collaborators and acquaintances, gather today in Nomadelfia not only to welcome the Pope, but also to say that "yes, we also believe that it is possible to live as brothers, it is good to live the Gospel, we too we want to help build a fairer world! ".

The helicopter lands at 8.05 am on the Nomadelfia sports field. Everything as expected. To welcome Pope Francis HE Mons. Rodolfo Cetoloni, Bishop of Grosseto, Don Ferdinando, successor of Don Zeno Saltini and Francesco, President of Nomadelfia.

Pope Francis' journey begins to "see how and where the community lives and works". St. John Paul II had said it in the historic visit of 1989 to the Diocese of Grosseto and Nomadelfia.

The first stop is the Nomadelfia cemetery. In this season of the year it looks like a garden; it is a place that speaks of life. Pope Francis pauses on the tomb of Irene, the first Mother of Vocation, and before gathering in prayer on the tomb of the founder Don Zeno, he listens carefully to his spiritual testament. “A little collected has arrived - said Bishop Rodolfo who accompanied him - and slowly, listening to Nomadelfia, he marveled. In a particular way of work, of the education of children. It gradually warmed up. "

When the pope reaches the family group "Poggetto" he finds all the members to welcome him. The first to welcome him is a father: "While I was telling family groups to the Pope, he always held my hand." And the pope greets everyone, one by one. The emotion is great. Entering the house he stops in prayer in the chapel with the presence of Jesus the Eucharist and entrusts two children to the families of Nomadelfia with the words of Jesus from the cross to the Madonna and St. John: "Here is your son", and to the children "Here are yours parents. " "In the family group I seemed particularly attentive - commented Don Ferdinando - he breathed a family atmosphere". Two mothers had prepared a small breakfast as a welcome. And to everyone's surprise, Sebastiano, one of the children entrusted, asked and obtained from the pope to take a ride on the mobile pope.

"He is a pope attentive to people - underlined President Francesco - who wants to meet the figure of Christ in every face".

The arrival in the Sala Don Zeno is awaited with great enthusiasm! The pope stops to greet the sick and those closest to the stage. The president addresses the greeting on behalf of the whole community by summarizing the essential lines of Nomadelfia: "We ask you to accompany, in this epochal change, the little Nomadelfia so that it can be faithful to its vocation and to sow even more fraternity among the families in the world" .

As a gift to the Pope, young people offer a moment of entertainment to tell the story and the central aspects of Nomadelfia's life. From its origins, with the reception of minors without a family; the arrival of the first girls who chose to become mothers of these children; openness to the first married couples, who are also available to welcome foster children; until today. Young people are visibly excited and Pope Francis listens and observes with great attention. At the end, the children of the family school give the pope a book made by them and a stone as a symbol of his role in the world: "You are Peter and on this Church I will build my church".

The pope addresses Nomadelfia calling it "a prophetic reality", "a large family with the straightforward flavor of the Gospel". And he concludes by inviting us to move forward.

“The community must treasure the words that the pope said and look for indications for our future in his sentences. In this speech there is the idea of a light, on-the-go Nomadelfia that opens up to the world and also a great continuity in referring to Don Zeno ”.

Nomadelfia thanks you Pope Francis! And he renews with deep joy his commitment to fidelity to the Church and to witness in the world.