Women of Faith for Peace: the peace tour stops in Nomadelfia 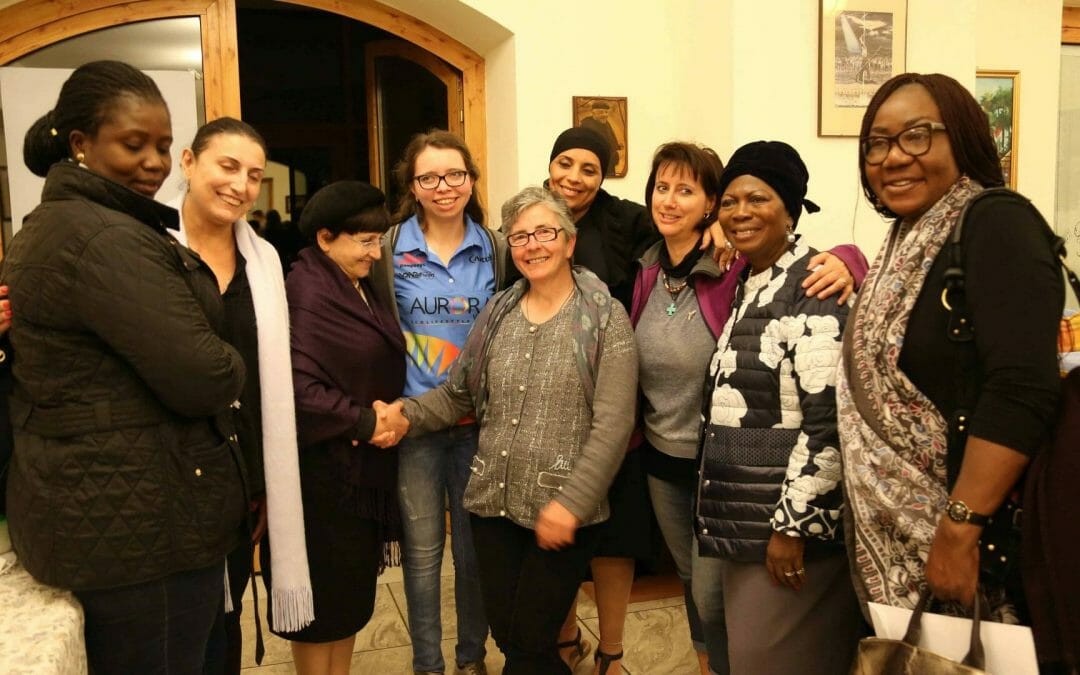 "Where two or three are united in my name, I am among them" - say the scriptures, and we are one family here tonight.

These are the words of Evelyn Anita Stokes-Hayford, a Christian Baptist, which clearly express the meaning of the meeting between Nomadelfia and the international network Women of Faith for Peace.

After the prestigious recognition of the Golden Lion of Venice 2017, the group is back in Italy for a tour that starts from Rome. On April 16 they take part in a round table at the Luiss Women of Faith for Peace: the new generations, as witnesses of interreligious dialogue in contexts of conflict. On Tuesday 17th they will participate in a meeting organized by the CEI Office for ecumenism and interreligious dialogue in the Pisai headquarters entitled The faiths in the Middle East. 800 years after the meeting between Francis of Assisi and al-Malik al Kamil. They will also stop in Rovereto, where they will pray for peace at the foot of the Bell of the Fallen.

"We started in 2009 with women leaders from the Holy Land. All different, who hated each other and didn't know each other. - the spokeswoman of the group Lia Beltrami explains - We have chosen not to be part of any association to maintain our freedom. Our commitment is to live dialogue and peace firsthand, telling everyone that living together is possible". Fed up with many congresses, conventions and events in which peace is discussed, these women started from a simple and concrete reflection: "If the road is common, let's start cleaning it together". Since then they have been called to many places to bear their testimony. "They pay their choice and their commitment to dialogue and peace at a very high price".

Lia Beltrami. Cristiana Cattolica, Italian. Director, writer and manager, she is the founder of the "Women of Faith for Peace" network. In 1997 he founded Religion Today Film festival, the first film festival on interreligious dialogue.

Adina Bar Shalom. Ultra-Orthodox Jewish, Israeli. “My father was a great leader and rabbi in Jerusalem. I have always felt the duty to deserve to carry on the work he started. I tried to change something in Israel. " Founder of Haredi College in Jerusalem, she was recently awarded the "Israel Award for Outstanding Contribution to Society and the Nation". She works to bring ultra-Orthodox Jewish women together with Palestinian and Christian women, promoting paths of mutual knowledge. In October 2016 he took part in the march for peace. More than 4000 Israeli and Palestinian women of all religious denominations walked together for about 200 km, from northern Israel to Jerusalem, united by the desire to build a possible coexistence together. “I strongly believe that religions must first of all carry on the value of human life. God gave us life. We are required to bring peace among all peoples. "

Nuha Farran. Arab-Christian, Israeli. Lawyer in Haifa and promoter of development paths for Christian women. For 22 years he has worked with associations and non-profit organizations that work to resolve conflicts between Christians and Muslims.

Evelyn Anita Stokes-Hayford. Baptist Christian, originally from Ghana. Former Ambassador of Ghana to Italy, Croatia, Slovenia, Turkey, Malta. She was President of the Board of Directors of the World Food Program. She currently works alongside young women to foster dialogue based on faith and defines herself as "ambassador of God".

Olha Vozna. Greek Catholic, Ukrainian. Coordinator of the Religion Today Film Festival and President of the Christian-Ukrainian Association of Ukrainians in Trentino "Rasom".

Faten Zenati. Palestinian Arab Muslim, lives in Israel. "It is not easy to put all these things together." Activist and board member of a cultural center open to young Jews and Muslims in the city of Lod. "I strongly believe in doing small things, one step after another."

During the stay in Italy the delegation is welcomed into the family group of Rome. It is a good opportunity to see Jewish, Christian and Muslim women conversing in friendship under one roof. And it is even more significant to know that the house is a small Catholic reality like Nomadelfia. All sitting around the same table in the simplicity of a family. A moment of encounter to deepen mutual knowledge and finally an alternation of prayers, recited by each according to their own creed, but all addressed to the same God. It was an exchange of experiences, but even more a meeting of faces that - however foreign - they recognized themselves in the only desire to do something together to build a world of peace.

“Thank you very much to Nomadelfia. We Women of Faith for Peace we felt truly welcomed! "