Nomadelfia Evenings: a fraternity to be built 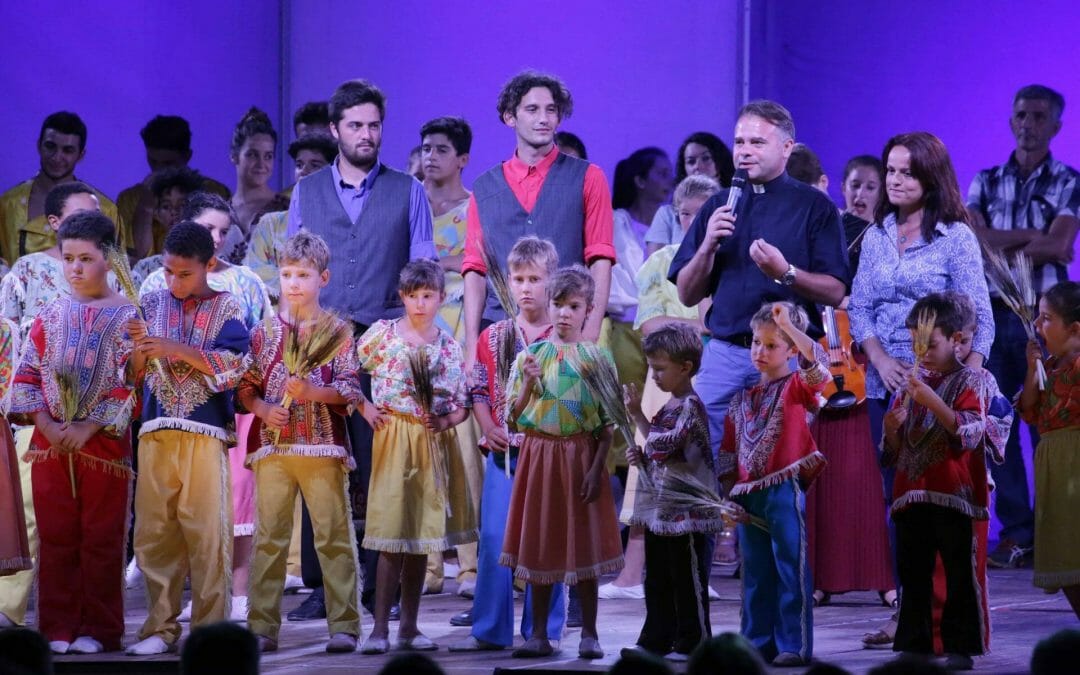 “You have sent so much joy. You have transmitted life because when there is joy there is life. I believe that Don Zeno wants to leave us this message, of a joy that must be overflowing in all of us. The joy of feeling loved by a God who is a father and walks with us ".

This is the echo that the Nomadelfia Evenings left in Puglia, according to the Bishop of the Diocese of Conversano-Monopoli Mons. Giuseppe Favale.

“What you have proposed to us seems like a dream, instead it is reality, it is life. - this time it is a young priest to express his impressions - And I who have been to Nomadelfia can testify that it is possible to live the Gospel, it is possible to welcome the other and break down the walls ".

Since the end of July about half of the population of Nomadelfia has moved to Puglia, welcomed first to Andria and later to Monopoli, to bring a message of hope through the Evenings, which Nomadelfia has been offering in the squares since 1966. “We don't carry ourselves, our qualities, and we don't even bring Nomadelfia”, Is what the current successor of Don Zeno recalled on the occasion of the imminent departure for the Evenings. "Let's go to bring the Gospel, good news for all".

Also the Bishop of Andria, Mons. Luigi Mansi and of Cerignola, Mons. Luigi Renna, met the nomadelfs in the summer evening tour. In addition to them, mayors, councilors and parish priests have caught in the dance performances an appeal to sharing and fraternity.

It has been an intense month, 10 locations visited with the Evenings for a total of 16 performances, but also full of meetings with the locals and moments of study. Significant the visit of the national President of the Anti-Usury Council, Mgr Alberto D'Urso, who met the nomadelfi in Andria recounting his experience and his commitment to combat gambling. There were moments of recreation and opportunities to admire the natural and architectural beauty of the area. Numerous visits to cities and places that tell the faith of the populations over the centuries: Monopoli, Bari, Ostuni, Polignano, Trani with its famous white cathedral on the sea, Canosa with the beautiful underground, the castle of Federico II in Castel del Monte, the Saline di Margherita di Savoia, the Caves of Castellana. Important news this summer were the testimony brought by the older children to the Bari juvenile prison and the participation of young people in the meeting in Rome in preparation for the 2018 Synod of Bishops.

But this is only the part that is most visible, like the tip of an iceberg, like those shrubs that pruned to satin, return to flourish every year. Essential is always what is at the base. Without live and strong roots, no plant finds the strength to bear fruit. "We are a people who partially go on stage, but everything lives", recalled Don Ferdinando of Nomadelfia during the Bitetto evening. At the same time, in fact, life in Nomadelfia continued with greater intensity, united in constant prayer with the part of the population engaged in the apostolate in Puglia. The turnout of visitors came very numerous, those looking for answers for their own lives, those with the desire to deepen a different way of living, those with the desire to experience a fraternity experience for a few days.

"The effort of propaganda is the effort of a fraternity to be built", is what a French philosopher says about the "propaganda of the faith", or the spreading of the good news of the Gospel. And the small Nomadelfia, as usual, has ventured again this year on the roads of the world, aware that the most eloquent apostolate is not the one made by the beautiful words marked in front of the television cameras of a television studio, but it is the one witnessed by the little ones gestures performed in silence and in the joy of serving the Lord in the brother. The most listened to and understood sermon is everyday life, St. Francis also reminded him of his confreres, when he sent them two by two through the streets of towns and cities: "Go and preach the Gospel, if necessary also with words!".

After the summer Nomadelfia starts again with a renewed enthusiasm. "We hope that for you it was a beautiful vision, almost like a visit, a caress, a hug", it is always Don Ferdinando of Nomadelfia who greets the crowded square from the stage in the name of the whole population. “Somehow, this evening I also receive a hug and a caress from you, because seeing you so numerous, almost like a people around us, I felt filled with joy. And you have given a positive, fresh, exciting and enthusiastic reflection of a people who, in the face of simple, beautiful things, children, can still grasp, like bees flying on flowers, nectar ".

Let's not be satisfied then "with the prudent step of those who queue at the end of the line", is the invitation addressed by Pope Francis to the young people gathered at the Circus Maximus in preparation for the 2018 Synod. “It takes the courage to risk a leap forward, a daring and daring leap to dream and realize like Jesus the Kingdom of God, and commit yourselves to a more fraternal humanity. We need fraternity: take risks, go ahead! "