Let's save our common home 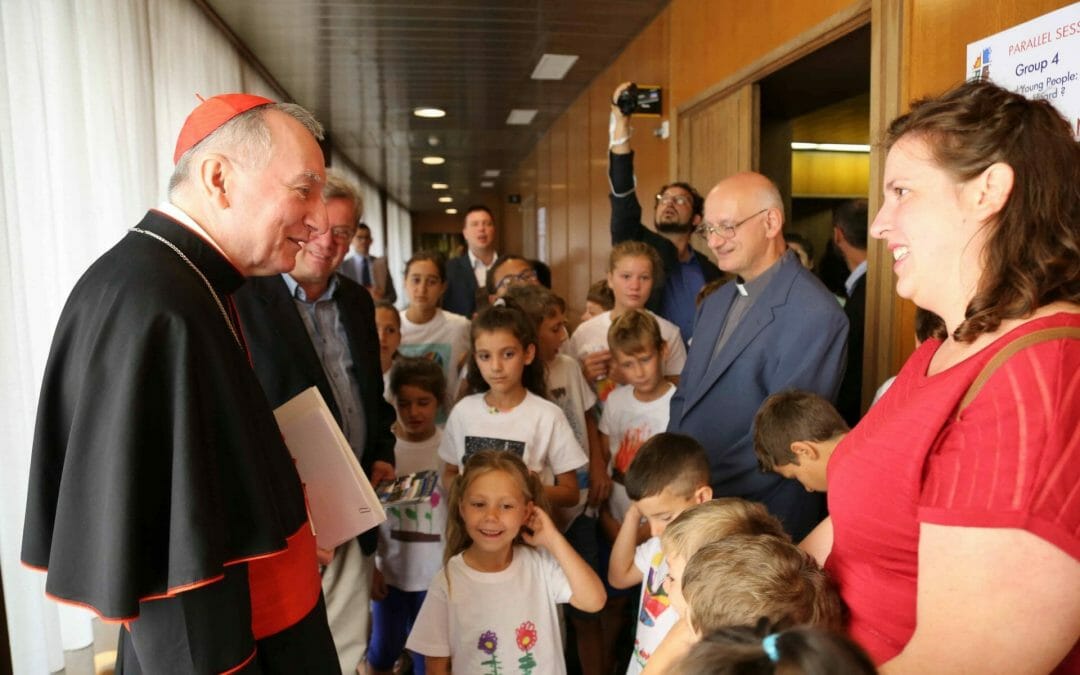 What kind of world do we want to convey to those who come after us, to the children who are growing up? (Laudato Si '160)

They were the primary and middle school children of Nomadelfia to open the international conference on Laudato Si 'at the Vatican: "Saving our Common Home and the Future of Life on Earth".

"Change civilization starting from myself"; drawing inspiration from this teaching by Don Zeno, the boys told the participants that the only way to save the future of the new generations and that of our common home is that everyone makes their own contribution. Thirty children aged 6 to 11 opened the works inviting participants to pray on the notes of the Canticle of the Creatures. Small gestures characterized by simplicity and joy, to remind you to face every situation by putting your head, heart and hands. Immediately afterwards, the biggest 4 took the floor to tell what they have already done, with their small choices, to build a new world. Finally, the invitation to Prophetic Economy, an international event promoted by various organizations and movements.

On behalf of the youngest from every continent, the children of Nomadelfia greeted by launching an appeal for everyone to do their part.

Promoted by the Dicastery for the Service of Integral Human Development on the occasion of the third anniversary of Pope Francis' Encyclical, the conference involved representatives of various sectors of civil society, of different religions, churches and movements, different peoples and cultures, scientists, politicians , economists. Many people of good will with the desire to meet to dialogue, make concrete decisions and implement them together.

“Our common home is falling apart and we have to face challenges never seen before. There is no more time to waste ", card. Peter KA Turkson, who invited to create “a great alliance, a network of people passionate about protecting the environment ". And the card. Pietro Parolin reiterated the encouragement to "Trace concrete and participatory lines of action", stressing that, as Pope Francis recalls, "The cry of the earth is intimately linked to the cry of the poor".

Important testimonies brought by young people from various continents, from the indigenous people of Amazonia to the inhabitants of the Pacific islands, also the presence of a Greenland shaman is significant. The working groups were very animated, from which the urgency to take concrete decisions emerged clearly. Firstly, an ecological conversion is needed, which implies a profound change in behavior and attitudes; adopt a sober lifestyle that aims at the real needs of each and not at the desires of some; take care of each other and take care of things and the environment; have as objective the realization of the common good. And such decisions cannot be made without serious financial commitments. "We need rules for finance - summarized the secretary of the Department for Integral Human Development. - We do not reject the economy, but we appeal for a new economy". And this call today becomes a commitment, because - concluded Msgr. Bruno Marie Duffé - “we want to choose the path of life together".

Even Pope Francis wanted to combine his voice with that of the many gathered on such a special occasion. Receiving the conference participants in the Sala Clementina, the Pope wanted to greet them one by one, look them in the eye and bless their commitment. The pontiff expressed his concern about the "real danger of leaving rubble, deserts and dirt to future generations ”and reiterated its call on governments, financial institutions and civil society actors to implement an urgent ecological conversion.

All this, however, presupposes "a transformation on a deeper level, that is, a change of hearts, a change of consciences" and a great humility in paying attention to the traditions of the Aboriginal communities: "How much can we learn from them! ". “For them, in fact, the land is not an economic good, but is a gift of God and of the ancestors who rest in it, a sacred space with which they need to interact to feed their identity and values“.

On this path it is essential not to give in to pessimism and despair. "At times it might seem too difficult an undertaking, because there are too many particular interests - continued the Pope - and very easily the economic interest comes to prevail over the common good and to manipulate information so as not to see its projects affected; but human beings, capable of degrading to the extreme, can also overcome themselves, return to choose the good and regenerate“. And there was a beautiful appeal for the "concern for this planet do not take away the joy of hope ", why "injustice is not invincible "!

“Humanity has the knowledge and the means " to be able to change, as stated by Pope Francis and reiterated in the international conference; we must therefore act together responsibly.

In the conclusion of the conference, or rather the real beginning of its implementation, the call of Card. Turkson resounds: "Everything must start with us. We must recognize that our contribution is essential. We don't have to wait for someone to do something, we have to act. Ecological conversion is the conversion of a person ", of our person first. Three key verbs of the two days: see, judge, act. Only one final appeal: “Let's act now, let's act together with all the people of good will!